Ralph Brodt, Jr. understood from a young age that music enriches lives. In 1957, he began teaching private lessons at a local music store called Zellner’s Music. He developed a close relationship with the Zellners themselves, who respected his love of music, hard work, and pleasant demeanor. Ralph and his wife, Edith, purchased the store from the Zellners in 1960 and changed the name to Nazareth Music Center. 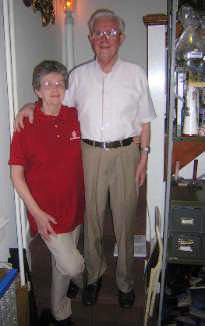 Since that time, the Brodt family has expanded the store immensely. What once was a small storefront now extends half a block long and four stories high, but the feeling of a “Mom and Pop store” remains. In 1983, Ralph and Edith’s second child, Scott, assumed leadership of the store. Ralph Brodt, Jr. passed away in 2005, but Edith continues to work in the store to this day, as do Ralph and Edith’s oldest child, Ralph Brodt III, and their youngest, Nora Brodt McGinnis.

The Nazareth Music Center supplies musical instruments to a large number of schools, colleges, universities, and churches in and around the Greater Lehigh Valley and repairs instruments for both local customers and those from greater distances. Touring musicians have come to the store to purchase supplies or have instruments repaired, including Eddie Money, Phil Woods, Steve Howe, Rick Braun, George Thorogood, Billy Squier, Bill Watrous, Dave Liebman, and Tim Warfield.